After an average trip to Ranthambhore to Ranthambhore in January-2015, I headed back in less than 2 weeks. I went along with my father and two of his friends. We hoped on a plane from Bangalore to Jaipur on the 1st of February, 2015 and drove to Ranthambhore. From the next day, we had 8 safaris.

The next morning, I picked up my cameras and sat in the gypsy with high expectations. On reaching the gate, the guide and driver completed their routine formality and we proceeded into the park. The zone we had was 3. We drove past Rajbagh Lake and reached Malik Talao. No movement anywhere in the way we came. We drove to another place and came back to Malik Talao.

Krishna or T19, the mother of 3 cubs was basking in the sun by the lake. Before we could park up, she got up and started walking towards zone 4. She had crossed over into Zone 4 and came back into Zone 3. But there were only two cubs with her at that point. Then I heard from the guide that one of the three cubs had been missing for a few days. She was determined to find the cub and continued to call out to the cub. She walked along the road and went into the Rajbagh Palace. All vehicles continued to wait by the lake hoping that she would walk out of the tall grass. The clock was ticking towards 10:00am. No sign of the family. All the people lost interest and left to the exit gate. My guide insisted we wait for 2 more minutes and…….

One of the cubs walked out seeing the crocodile. It sat by the lake bed snarling at the croc as it swam by. Then Krishna and the other cub too walked out of the grass and sat on the lake bed. 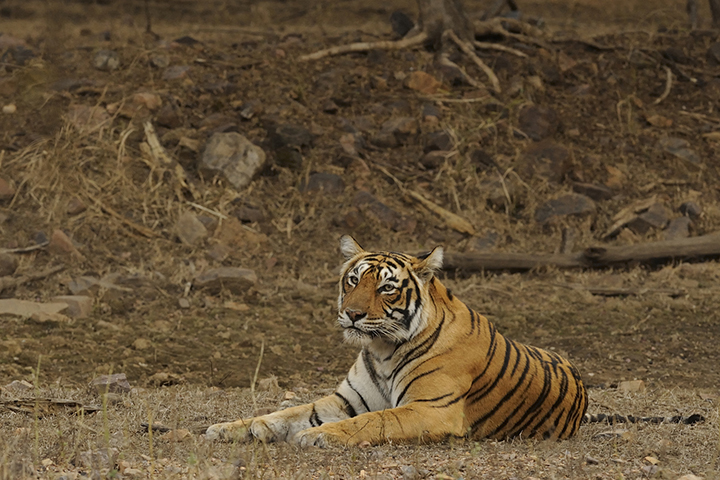 The evening safari was another great one. Krishna sat by the road calling out to her missing cub. She walked all around the woods opposite Rajbagh and being unsuccessful in finding her offspring, she sat by the road. 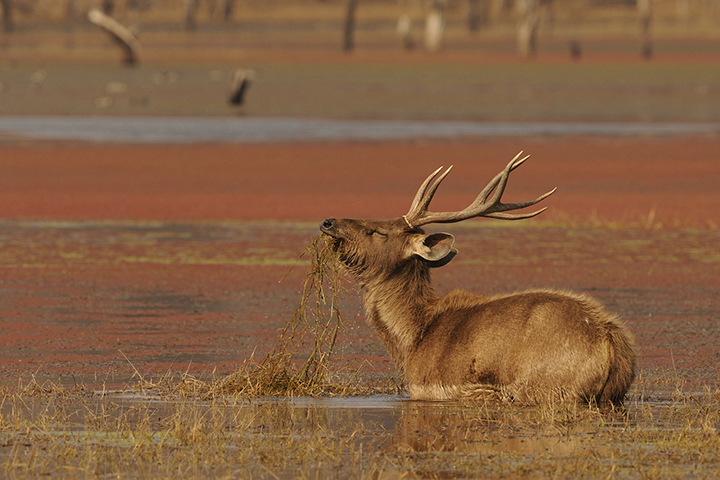 The Malik Talao lake on the border of Zone 3 and 4 has a picturesque landscape. The Sambar deer grazing in the lake during the midday is great to photograph. 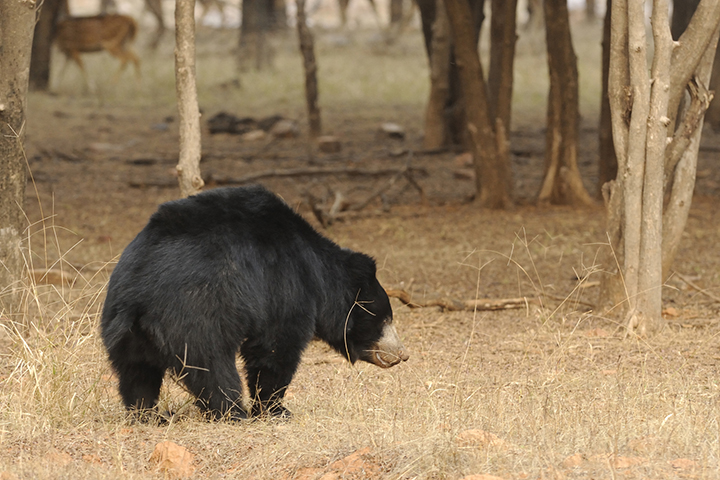 As we were driving back to the gate on safari #4, there were loud warning calls by spotted deer. All our eyes were peeled open, hoping to spot a tiger. But to my great surprise, it was a Sloth Bear. The bear just did not lift his head a look up. He was busy foraging on the ants and crossed the road very close to our vehicle. The light was very low and it was quite difficult to expose it.

Zone 5 was allotted to me 90 days before when I booked the safari online. After about 2 hours past 2:30, the alarm calls of sambar deer slowly increased. Some were quite frantic. But the area was to big to conclude where the tiger could be. We were waiting atop a small hillock. Below the hillock, jeeps slowly lined up. We got down to that place as soon as we could and a young male tiger had just hunted a sambar fawn. The jungle then went silent. Due to a lot of undergrowth, there were no areas where I could get a good angle to shoot. Later they identified him as T74. I am too bad at differentiating tigers. We all left the area with smiles on our faces. We reached the gate and in Zone 4, Krishna had also attempted to hunt some deer but she was unsuccessful.

As all the jeeps parked up at the entry of Zone 1/4/5, discussing the great sightings, a huge male leopard walked down the road leading to Zone 4 and Zone 5. He walked down to the check post and walked away into the grass. To see a leopard in Ranthambhore is great and to photograph it is something very special. 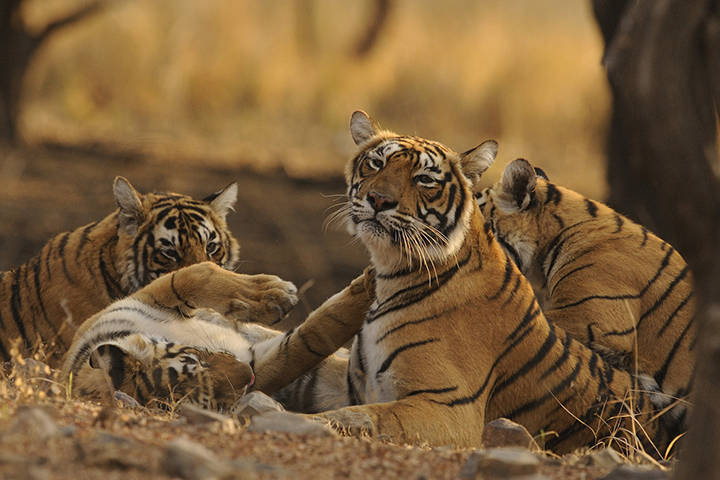 I was only scheduled for 8 safaris. But since my flight out of Jaipur was delayed by a few hours, I decided to go on one more safari. The 9th safari was fantastic. We saw and photographed Krishna and her 3 cubs. The family was reunited again. All the cubs ran about, playing with each other and Krishna. The trip had come to an end with whooping 16 sightings of 5 different tigers, 2 leopards and a bear. I hope to be back this summer either in May or June.