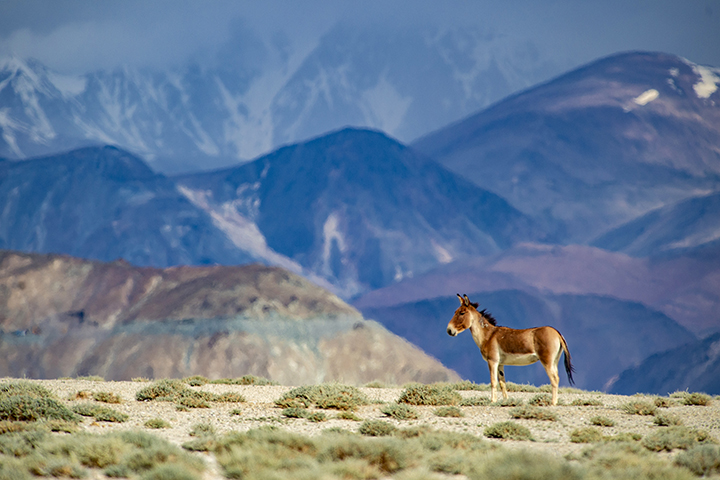 India, a land of extremes ranging from the Himalayas in the North to the Coastal plains of peninsular India, the rainforest of North-east to the Thar Desert in the North-west, the Mangroves in the east to the Tiger heavens of Central India, the country boasts a myriad of landscapes abounding with a plethora of wildlife which have adapted to endure the harsh environments in the country. One such animal is the Wild Ass surviving primarily in the deserts. The Asiatic Wild Ass confined to the salt pans of Rann of Kutch and the Tibetan Wild Ass in the high Tibetan plateau.

The Little Rann of Kutch in Gujarat which lies South of That Desert is an Oasis for wildlife. One of the iconic mammals in the region is the Asiatic Wild Ass. This species has found a way to adapt itself to the harsh environments of the Little Rann of Kutch with very little water and grazing grounds. They’re quite a common sight in the Rann and are often bolting away when they see a vehicle approaching them. The Rann being so open, its possible to see the asses even from about a kilometre away. Even after approaching quietly, they’re off moving away. Photographing them from eye-level requires planning and patience. Closely observing their behaviour, and planning every move to get closer is absolutely necessary at most times. One evening in the Rann, I saw this herd of Asses running away and they stopped at a distance. Then I spotted a Falcon and was lying flat on the ground waiting for it to move when these asses started trotting back towards me and made a swift turn in the other direction. I still have no clue what spooked them to run in such a frenzy and that too towards me. 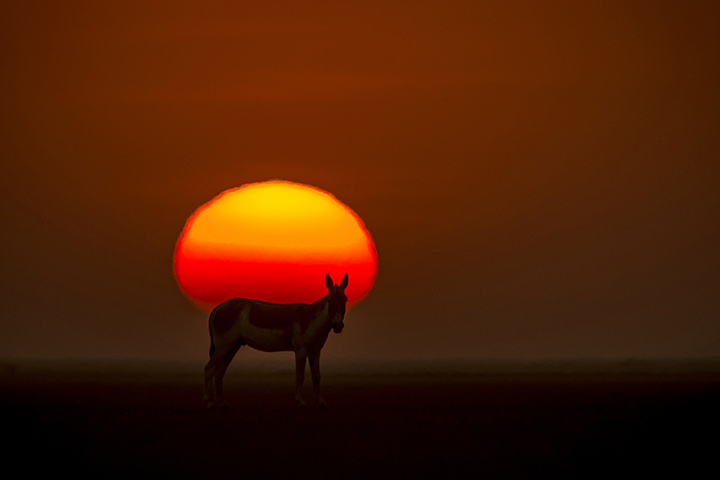 Being in the extreme west of India, the Rann of Kutch is indeed the land of the setting sun. Being so open where it seems that the earth and sky are meeting, the Little Rann of Kutch is an ideal landscape for sunset images. In some places, for as far as the eye can see, you see literally nothing except for the dry, cracked ground. Occasionally, one gets lucky to be able to fit a Wild Ass in the middle of the ball of fire. Over the 6 evenings I spent a few years ago, the asses were either moving too fast before the sun came down or I wasn’t close enough. It was on the last evening, with all the experience from the previous days, I was able to plan to position and wait for the exact angle. Once the sun comes down so low, it is a matter of a few seconds before it disappears.

Meet the mountain cousins of the Asiatic Wild Asses. The Tibetan Wild Ass or locally called Kiang. Their distribution ranges across the high ranges of the Himalayan and Tibetan Plateaus. Unlike the Asiatic Wild Ass, their Tibetan cousins aren’t endemic to India alone. They’re population range extends across from Northern India and even in parts of Tibet, China and the neighbouring countries on the plateaus. Similar in behaviour to the Asiatic counterparts, Tibetan Wild Asses also bolt away when they see people. I was traveling across Ladakh photographing landscape and wildlife when I saw a Kiang near the Tso Kar Lake.

The Tso Kar lake is rich in salt and this attracts wildlife around its waters. Seeing the Kiang, I got off the car and approached it from the other side for better light. The Asses were quite close to the road when a group of bikers came by and they started trotting. Standing there panting, due to the high altitude and lack of oxygen, I could have barely held my camera steady. It was my luck that I had a tripod on which the 600mm lens was mounted. The trotted across and in no time, they were gone. In Tso kar and the rest of Ladakh, walking even 200-300 meters is a challenge given the low oxygen.

The landscape of Ladakh is very pretty and the occasional Kiang in the foreground adds a lot of beauty to photographs. Be it Rann of Kutch or Ladakh, both the places deserve to be visited not just for the Birds or the wildlife, but for the vast expanse of land and the beautiful landscape and also for the rich and diverse culture which both the areas boast. The local communities in these regions lead a very different lifestyle in this harsh environment and its interesting to learn how they have adapted so well and managed to survive this long.