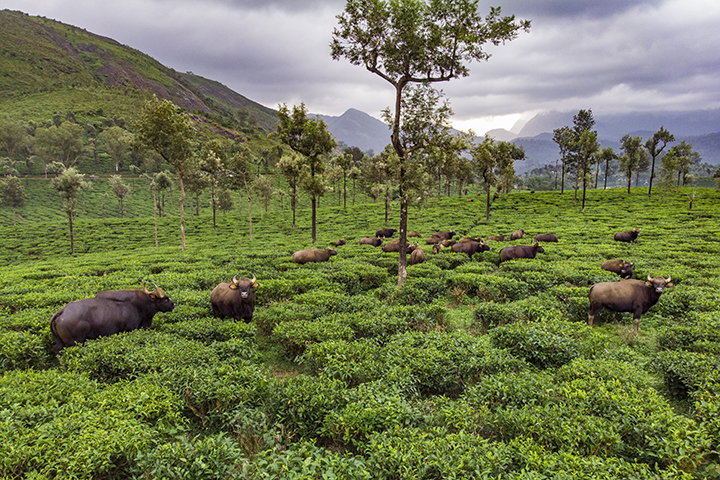 The advent of consumer drones have revolutionised photography and videography to an unimaginable extent, of course governed by rules and regulations. Never before seen perspectives of places and objects have been made possible and it has stretched the levels of creativity to new heights. Over a weekend in the Tea Estates bordering the Anamalais in Southern India, I documented some wildlife which have made the tea gardens their homes….. 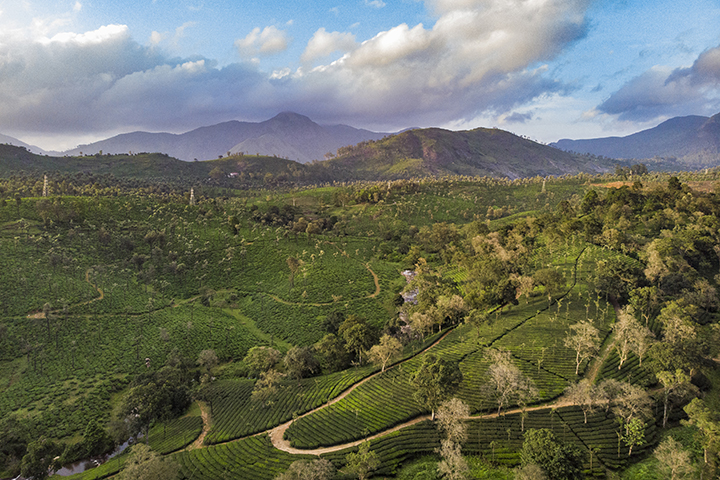 I spent a few days during the monsoon in a town called Valparai nestled in the Anamalai Hills. Valparai was a plantation hub during the British colonial rule in India and several thousand acres of shola forests and grasslands were cleared to quench Britain’s growing demand for timber and also to plant tea and coffee. It did have a huge impact on the region’s wildlife and put excess pressure on the last remaining patches of Forests.

However, now a days, wildlife particularly large mammals like Indian Gaur and Elephants venture into the towns and also graze in the tea plantations. It is quite a common sight to see large herds of Gaur particularly during dawn and dusk in the tea gardens. During my last trip there, I used my DJI Mavic Air to photograph some of the wildlife in the tea gardens with an aim to show them in a perspective not seen so often.

My first encounter was with two young elephants. Both Tuskers walking through the gardens. Keeping in mind that animals can be disturbed by drones if I approached too close, I gradually manoeuvred closer keeping a close watch on them. The bulls initially seemed nervous, but eventually got curious and began smelling the air to figure out what it was. They probably lost interest and continued while I retrieved the drone. With the sun on the opposite direction, I had to approach them from the opposite side. Which meant, I had to fly around them for best light for photography. In all of the 3-4 minutes that it took, they weren’t perturbed. The drone was also not in my direct line of sight. I had to depend on the live feed to make sure I didn’t fly in to a tree or hit any other object.

A herd of more than 15 Indian Gaur was a sight to behold. Not often do we see such large herds in the open. It was still dark at around 6:45 am and the drone’s anti-collision sensors warned that the ambient light wasn’t sufficient to active obstacle avoidance. Waited for a while and when the take off conditions were met, I flew over a 100 meters from the road to get close to the herd. Maintaining low altitude, the perspective it rendered was something I had been dreaming of for quite a while. Also noticed that when the drone was about 8 feet from the ground, the animals looked up briefly and continued to graze.

Later in the morning, there was another bull. The tea plantation workers continued their picking activity despite he being relatively close. It was a clear example of how well the wildlife and the people of the hills have learnt to co-exist. Using my Nikon D4s and the trusted Nikkor 300mm f/2.8 VR coupled together with a 1.7x TC, I photographed him. Then I let out the DJI Mavic Air to get a comparative perspective. The below image from the drone shows the entire habitat of the Gaur. Such angles and perspectives would be close to impossible if not for a drone. 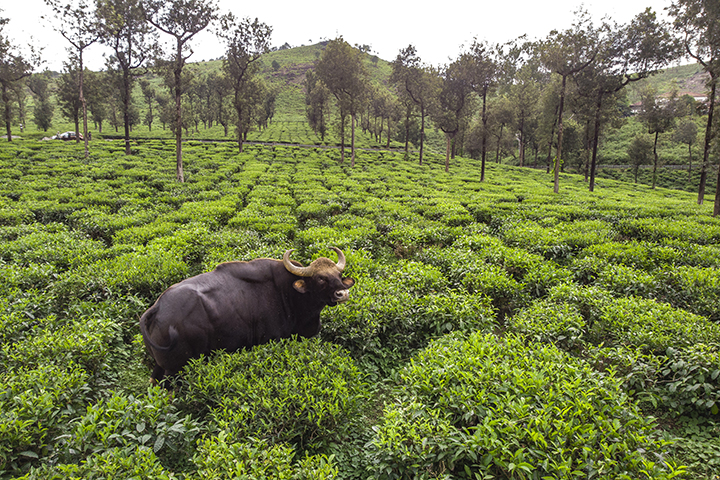 All the images used in this blog were photographed on private property and drones were flown over with the permission of owners. No wildlife was disturbed in the course of photography and proper precaution was taken. I was also accompanied by the in-house naturalists who prescribed the limits of approaching animals. To all other drone operators, requesting you to please procure permissions from competent authority before operating drones, particularly in protected areas.

Flying drones for aerial imagery may seem exciting and interesting. But there are a lot of challenges involved. For security reasons, it is of utmost importance to obtain permissions for flight. Transporting drones on commercial airplanes are also a challenge. Until recently, I didn’t face issues carrying the drone in hand luggage. But I was refused a few months ago where the airport staff in Chennai refused to allow me board the flight if I hand carried the drone. Indigo airline’s ground staff were nice enough to help me pack the drone (battery detected) into a small briefcase I bought at the airport and handed it over to the pilot. I received it again at baggage claim in Coimbatore. Make sure to pack your drones into your suitcases and put it into the luggage hold. Remember to carry your batteries with you.

Regarding International travel, they sometimes may object on your way back into India. Many countries also don’t allow the import of drones. Kenya for example has banned drones and even if you wish to carry it through Kenya but not use it, the customs will not allow it. Keep in mind to check all guidelines of the country you’re traveling to before packing your drone.